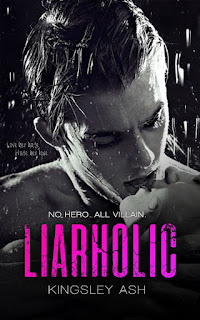 Liarholic by Kingsley Ash
One, two, three, four, five . . . the lyrics to the hell inside your OCD head.

You’re broken, Amy. I did this. Can’t undo that.

Six years ago, I played a cruel joke on you in front of the whole school. I ripped your heart out.

Now, I’m back to fix what I broke. I’m a psychologist, Amy. I can give you back the happiness I stole . . .

So what. She doesn’t get a choice.

So what if I make her attend my fake therapy sessions, keep the truth hidden.

So what if I get her addicted to my body like a painkiller, make her wish me dead.

I’m not the hero. I’m the monster. The orphan boy gone bad. Cursed, everything broken.

So what, when I discover a secret that makes her every inch off-limits, I won't keep my hands off her.

Her bones are made from emeralds, she’s that precious.

I won’t stop chasing her until she’s mine.

But Amy is a pretty little liar, too.

Only one of us is telling the truth.

So bloody what. Nobody’s gonna believe her over me.

Disclaimer: No cheating — this alpha-hole keeps it in his pants.

My rating: 3 of 5 stars
First, let me say this was not what I was expecting. I wasn’t expecting the triggers that I got. Liarholic is dark and twisted. Which is why I gave the rating I did. Honestly, I was expecting a RomCom, and I didn’t get that. This is not a story for those that have major triggers, and I think that should have been stated. As the only warning, we were awarded was there is no cheating. I did enjoy the fact that there was a slow burn. I really wish I could have enjoyed this book more. This was my first story by Ash, and although I didn’t enjoy this one, I plan to give the author another shot.
Goodreads Link – https://www.goodreads.com/review/show/3337203626
BookBub Link – https://www.bookbub.com/reviews/2485597519
View all my reviews
at 11:47 PM
Email ThisBlogThis!Share to TwitterShare to FacebookShare to Pinterest
Labels: Enticing Journey Book Promotions, Haney Hayes Promotions, HHP, Review