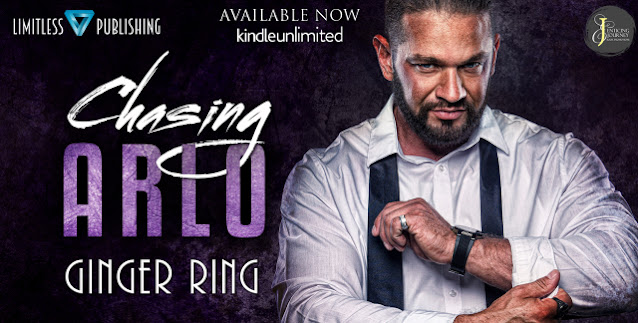 Chasing Arlo by Ginger Ring
A mafia princess doesn’t belong with a lowly soldier.
At least, that is what Arlo thinks.
He’s used to women only wanting steamy one-night stands and nothing more. Not until, to his surprise, he’s pursued by none other than the mafia princess herself.
Layla makes it her mission in life to tease and flirt with Arlo endlessly. It’s been a cat and mouse game ever since they met.
But if she only knew the truth. If she knew all the things he has done for her family, it would both amaze and horrify her.
With Arlo, however, it’s all or nothing, so when a bombing from the Russian mob occurs and a possible threat from inside the family looms, he steps up to keep Layla safe.
With everything unraveling around her, Layla quickly realizes chasing Arlo and more importantly, keeping him might be the only thing that saves her life...
My Review
My rating: 5 of 5 stars

What do you get when you take a Mafia Princess and a Lowly Soldier? Why Chasing Arlo, of course! Ginger Ring did a fantastic job with this Mafia novel. Now, I’ve read multiple Mafia books, and I can gladly say this one is in my top ten. It’s got great character, and the storyline kept me completely entertained. I was always like just one more page. Then before I knew it was over and I was wishin’ for more. If you have read Ring, you’re missin’ out. You should grab this one and the rest of the Genoa Mafia seriestoday!