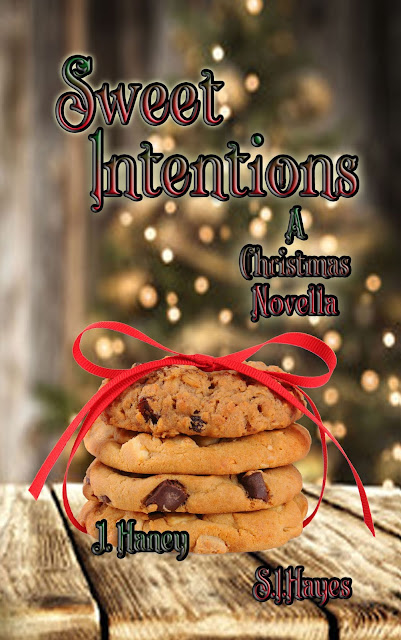 Absence makes the heart grow fonder unless you're Samuel Benson.
Betrayed by his own brother and the love of his life, Sam has stayed away for ten years until the death of the Benson Patriarch lures him home. Taking care of the Christmas Tree Farm is one thing, but can he face his past and reconcile the choices that were made, or will it all blow up in his face?
Peyton Miller was the girl next door. She’s been in love with the boy on Church Street since she was eight, but circumstance put her in the arms of his brother. Ten years later, Peyton is widowed with two children and a third on the way. Will she ever feel like her old self again? Will she be able to chisel the ice from Sam's heart to find the path to forgiveness? Can she ever forgive herself? 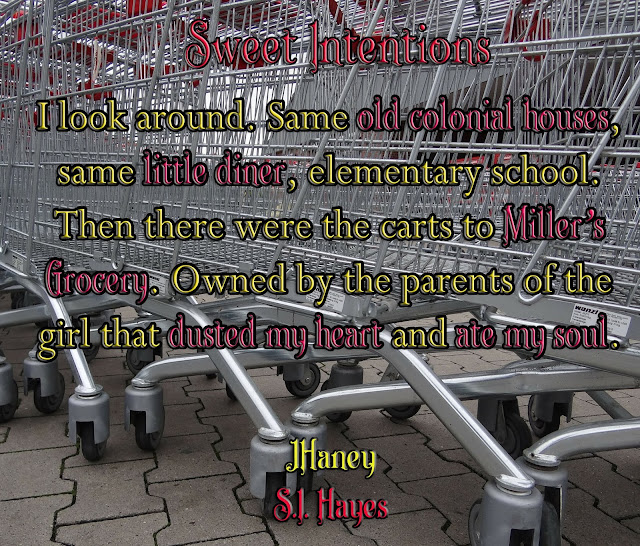 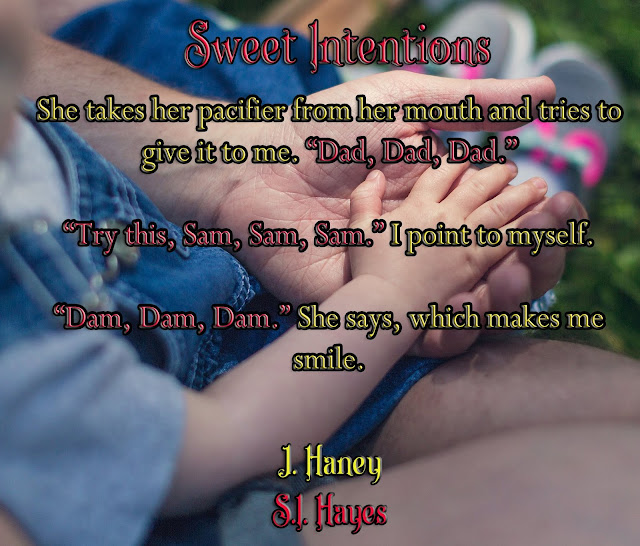 Back in the fields, it's all work again, right until we start to lose the light. By four-thirty, Boyd and Franklin have headed home to their wives, and I head back to the house.
“How'd it go?” Momma asks, rolling and kneading the dough on the counter. Sitting looking as annoyed as ever is Ryett. CHRIST, he looks just like I did at that age. Come to think of it; I got a scar over my left eye from a rock Jason threw during a rock fight when we were his age.
“Good, we cleared the northeastern quad. Could have gotten the Western, but the combine kept jamming up and slowed us right on down. Dad really should have gotten a backup. I mean from what I’m seeing you all ain’t hurting like when I was a kid.”
“That’s none of your business, as for a second machine, who do you suppose was gonna drive it? Your brother had his work and his family, your sister sure as hell couldn’t do it, she’d never be able to reach the gears and see over the steering wheel. You know I can’t do a stick, so it was on him and guys he could get here and there. Guys that had to be paid, sometimes housed and oftentimes fed.”
“Don’t go guilting me! I’d have come home, you all told me not to, that things were fine. That you were doing well, and I should just do what I was doing.”
“You should have brought your ass home once in a while.” Sadie comes in, what is it with her and the gum? The smell is crazy. It’s spearmint this time.
“Don’t you start, I got plenty to say to both of you, but-” I look at Ryett. “Now’s not the time.”
“Don’t stop on my account. I’m just the kid watching adults act like idiots.”
“Wy- Ryett!” Momma slips, almost calling him Dad’s name. She drops her head, with an exhausted shake. “You do not talk to your elders like that. If your Momma were here, she’d tan your hide.”
“You are my elder, Sadie is my elder, but him-” His eyes stare daggers at me. “He is the sperm donor that should have come home to help when Dad died.”
The balls on this little shit! “You know what kid, you wanna know why I wasn’t around? Ask your momma how long I was gone before she and your daddy got together.” I storm off the screen door slamming behind me. Ugh! This whole family has got me ready to fucking bolt. I can’t, though. I gotta stay, I gotta make sure momma is okay, for him. He would never forgive me if I abandoned her. Or that scheming little witch I call sister. She thinks I didn’t see the look in her eyes Wednesday when I saw her for the first time. I think, hell, I know she was expecting it to be like some trashy romance novel. We see each other, after ten years apart, desperate feelings ensue, and a great love affair begins. Sure, a love affair began that night for sure. Between me and Mylanta.
No sooner have I rolled a smoke than I hear a short cough. Turning, I see the boy with his stuff slung over his shoulder and a casserole dish in his hands.
“I’m supposed to say sorry and tell you NaNa said to take me home.” He lowers his hand, and there in his palm are the fuses for Dad’s Chevy.
“Isn’t that fortuitous, seeing as I have a date tonight.” I half-chuckle, he drops them into my hand and heads for the truck without another word. I get in, replace the fuses, and the truck purrs like the kitten it always was. “God, I missed that sound,” I say, putting her into gear. “So, where am I going?”
“You can take the dirt road. It’s a straight shot between here and there.” He gruffs.
“Wait? What road? The one to the cabin?” I ask, confused. There wasn’t any house for like ten miles unless he was talking about Old Man Miller’s place. See, my family and the Miller family have done one kind of business or another together for years. Before the Benson’s, it was my momma’s family, the Walshes. They took over the farm when Grama and Grampa Walsh passed. Leaving the place to momma. It was Dad’s idea to make it a Christmas Tree and Sunflower farm. All of them flowers were great for the Miller’s hives, so they worked together again.
“You have to go past the Cabin. NaNa and Grampa plant crops on our land in the spring. Along with Momma’s clover for the bees.”
“You’re in the big house? On Lover’s Lane?” I say headed for the road.
“Yeah, we moved there after Grammy and Granpa left.”
I nod. I haven’t been near that house since the night before I left. The night I said goodbye to his mother. Apparently, the night he was conceived. 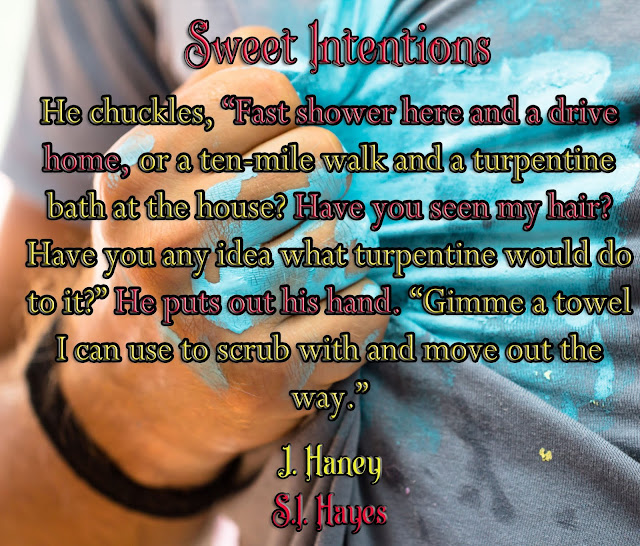 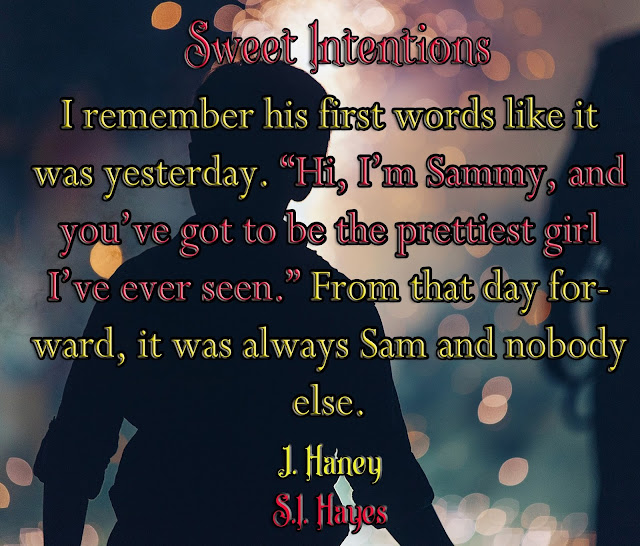 Ka-Thunk. That is the sound Sammy makes when he hits the ground. Sadie, in her natural way, shrugs and leaves after dropping a bomb. As for now, I’ve got an ache that needs to be scratched, and that isn’t happening with Sam out cold on the floor. I straddle him, rubbing my heat against him.
“If you don’t get up, I’m going to be forced to take measures into my own hands.”
“You’ll wind up pregnant.” He mumbles, barely moving his lips.
“I went out this morning. I’ve got provisions.”
“No time to go scrounging, fuck me now, give me a tit, or let me up.”
“How about you suck me while I fuck you?”
He does a full slow pelvic thrust. “I say unleash the beast.”
Boy thinks I’m scared. I’ve owned up to only having him for a short time, and if I’ve only got a week left with him, I’d like him to be fucking me. I flip open his button and unzip his fly, letting the beast come out to play. I wrap both hands around his cock before spitting on it to make sure it’s well lubricated.
“Nice.” He smiles. “Now, just lean into it, and I’ll be happy to suck you dry.”
I move up, so I’m on my knees before sinking down onto his hard pulsating cock. “Oh, fuck.”
Jesus, that feels amazing; the only thing that would be better is him sucking me dry. Just as I think it, his mouth wraps around one nipple as his hand plays with the other. My body begins to move on its own accord.
“Fuck… Sammy. You. Feel. So. Good. Ah, Sammy.” I all but shout as I get close to my first orgasm.
In, out. Fast, slow. Having sex with Sam now is so much different than the other two times. It’s not near as sloppy and way more calculated, making sure we both get just what we need. The closer we get to the end, the more frantic we become. Sam wraps an arm around my back, helping guide me the way he needs it. This puts us face to face. He laces his fingers in the hair on the back of my head and kisses me ever so deeply. This is the first time I’ve kissed this man in over ten years, and it is just what I need to send me over the edge.
“Oh, God. Sammy, I love you. Don’t stop.”
We finish together collapsing to the tile floor in a mess of limbs. Both trying to catch our breath.
“That was…” He trails off. “I think you earned a sandwich. What would you like me to make you?”
“I think there’s tuna in the fridge. You like that, right?” I smirk at him.
“Oh, no, never again. You know that.” He chuckles, as his stomach growls.
I pat his chest as I get off the floor. “Make yourself lunch. I need to clean up.” I head for the half bath off the kitchen but don’t quite make it as I’m scooped up and kissed.
“You need a good scrubbing, and I’ll be the one to give it to you.”
A knock comes to the door just as we make it to the stairs. “The world is against us. We have limited time before Ryett gets home; we need to make this snappy.” I snap my fingers.
“You snap at me again, and I’ll have to fig you.”
“There’s so many other things I wished you’d do.” I say as he opens the door. Ah. That’s cold. Did I mention I’m still naked?
Mitch is on the porch looking at us. “Oh, hi. We’re a little busy. Can you come back say this side of never?”
Before Mitch can respond, the door swings closed. “Now… Where were we?” Sam says, carrying me back to the stairs.
“Shower Sammy. I’ve been a dirty girl, and I need a good cleaning.” 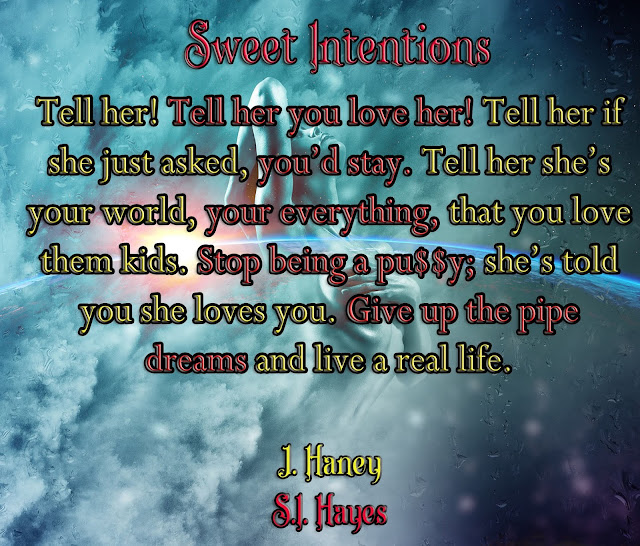 J. Haney was born and raised in Kentucky, currently residing in Greenup County, Kentucky with her family, where she is the proud momma to Jessalyn Kristine. J. Haney’s work tends to lean toward real life, drawing her readers into a world they can get lost inside.
S.I. Hayes was born and bred in New England and is currently living in Ohio. Running around Connecticut, she used all of her family and friends as inspiration for her many novels. When not writing Paranormal Drama or Erotic Romance, she can be found drawing one of many fabulous book covers or teasers.
Since Meeting in 2016, the pair have embarked on the journey of a thousand tales. Keep your eyes open and a fresh pair of panties close by. You know, just in case.